With his Caprices, Paganini has well-nigh revolutionised the technique of violin-playing. Evidently, there is a ”before Paganini”, an ”after Paganini”, and even a work like Brahms’ Violin Concerto takes its roots in Paganini’s Caprices. Apart from their sheer technical difficulties, these works give the fascinating impression that they are so many miniature operas. Their character is often highly

mischievous, full of brightness and colours. Of course, I had to reflect very carefully on how to play them best on the viola, all the more since Paganini himself was a skilled violist, and I like to fancy that he might have played these Caprices on the viola as well as on the violin. Once having pondered the matter thoroughly, I simply decided to devise my own transcription of the Caprices.

For violinists, Paganini’s Caprices are a fundamental path towards virtuosity, as well as a fantastic demonstration of bravura. By adapting them to the viola, I have striven, rather that restrain myself to that slightly superficial aspect, to “take possession” of each piece one by none, and to reflect deeply on their very substance, on the extraordinary richness of their material and their poetic content, not on the mere technical flashyness – even if it is very real and unavoidable. I imagine myself embracing the score, trying to play it without tension, to elaborate a kind of new language. I play a viola made in 1865 by Jean-Baptiste Vuillaume, itself a copy of Stradivarius, an instrument with a very clear and warm sonority – it took me seven years to make it sound like I wanted it to. Again, it is a way of “taking possession” of the material. I chose to record the Caprices with a snakewood bow by François Peccatte, aiming for a warm sound and a greater precision.

Paganini’s Caprices are generally considered to be nothing but slightly showy virtuoso studies, but my guess is that the composer has also written down some of his own extempore improvisations remembered from the musical jousts that used to take place between

instrumentalists at that time. And I feel a great freedom in language, with extreme contrasts in tempi and techniques, and of course an almost permanent link to the world of opera in general, Italian bel canto in particular. And I also have imagined what a singer would do with these musical phrases, thus reflecting on the best places to breathe. I might say that my playing technique, for these Caprices, is quite far from the usual instrumental frenzy. Yes, Paganini himself has undoubtedly lived frantically. He was a gambler, he even lost his violin on a bet at the Casino, and he died a ruined man. But he was beloved by one and all in his lifetime, creating a real myth by his eccentricity, his outrageous attire, his eerie stature. But beyond these merely anecdotal aspects, his music is brimming full with acute sensitivity, great humanity, and an absolutely exceptional intelligence. Obviously he was an artist far ahead of his time, but whose depth was not necessarily fathomed by his contemporaries. Basically, my desire was to go beyond mere appearances, and to seek the poetic substance of each Caprice. When going to very the point Paganini wants to make, one should never get lost in the purely decorative aspects. In the 6th Caprice, for example, which is outrageously difficult for the left hand, the music should be seen as a kind of breeze moving in the shade. It’s both enigmatic and optimistic…

For three years, I have worked day and night, figuratively speaking, on this recording. I have been a passionate Paganini buff since childhood – I began my musical life as a violinist and moved over to the viola when I turned 16. That year I integrated the Paris

Conservatoire both in violin and viola classes. It is much easier to navigate between the two instruments than is generally believed. Recording Paganini’s complete Caprices on the viola, as I eventually did, only makes sense – in my opinion – in relationship with a precise working method, and calls for editing the score into a workable version. It is a kind of great ”Paganini Project” I wished to develop, even though it would not make sense to play the complete Caprices in a single recital – one dares not imagine a respectable

restaurant that would only serve a menu made of a succession of sweets – a totally undigestible fare! While undertaking this recording, my thought went to future generations of viola players who might have the opportunity to take possession of these extraordinarily

rich and jubilant pieces, a cocktail of brilliance and depth, spectacular vitality and emotion, sometimes even of anxiety. Paganini was a great traveller, he had countless mistresses, he enjoyed life... And then there is also a flavour of dance to this music. While working

on the Caprices, I found a very reliable barometer in my daughter, four years old at the time, who would begin to dance while listening to me – the most obvious sign that I moving into the right direction... I taught myself to “swim alone” in these uncharted waters. Apart from Itzhak Perlman’s recording which I heard when I was young, I chose not to listen to any other version before working on them myself. When I do happen across this or that recording, I often feel that it is too fast, inadequate, that it does not breathe, or I cannot grasp any real reflection beyond the mere virtuosity. From my point of view, I chose to take possession the score and to strive to conjure up the richest and most expressive sound palette. In my work as a violist in general, I do realise that sometimes I take some liberties with sonorities, I do stretch instrumental ranges, I don’t hesitate to rewrite some scores – such as for instance my transcription for viola of Shostakovitch’s Sonata op. 40 for cello and piano. The viola really has this ability to tread the path of the violin on one hand, the path of the cello on another hand, and to be an organic link between both.

There is no impassable barrier, I believe, between my work on Paganini’s Caprices and, say, my interpretation of Schumann’s scores for the viola such as Märchenbilder: both musicians are very similar in their fantastic worldview and their eccentricity. In Schumann’s Märchenbilder, I imagine dragons and elves, exactly as when I play Paganini’s Caprices... It is no coincidence that Paganini was said to be a sorcerer who had signed a pact with the Devil. In my ear, it just appears that his music has the ability to create all sorts of fantastic universes, and this opened up new perspectives for later composers who grasped that the viola was able to achieve unsuspected miracles. From the harmonic point of view, I have reflected at length on the interpretation of these Caprices, by stretching or narrowing intervals according to whether they were in the major or minor modes, so as to create more or less luminous or dark effects. This is where the musical object is fascinating; it is an expressive purpose absolutely assumed by both composer and interpreter alike. Basically, Paganini’s thought evolves around singing, not just around the violin as such. He has really gone beyond his instrument,

and that is the way his music really makes sense.

«He did not know it was impossible, so he achieved it»


« As for Pierre Lenert, he is nothing less than the
first solo viola at the Paris Opera, and he has just
recorded (for the label Paraty) his own version for
viola of Paganini’s 24 Caprices. Beyond the bluffing
technical mastery, this is a great achievement in
musicality, in the discovery of new sound worlds, and
in the art of the «staging» each of the miniatures.»


« Beyond the virtuoso prowess lies an angelic and
celestial musicality that few soloists know how to
conjure up: from the imaginary celestial realm to the
incarnated terrestrial world, Pierre Lenert pursues the
path of a great interpreter, a natural Paganinian, in
this double album published by Paraty. Lenert plays
the « Count Basile Sheremetyev » viola made by Jean-
Baptiste Vuillaume in 1865.» 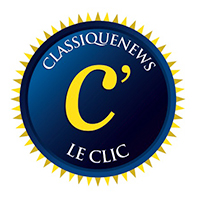